Intraocular melanoma is a disease in which malignant (cancer) cells form in the tissues of the eye.

Intraocular melanoma begins in the middle of three layers of the wall of the eye. The outer layer includes the white sclera (the "white of the eye") and the clear cornea at the front of the eye. The inner layer has a lining of nerve tissue, called the retina, which senses light and sends images along the optic nerve to the brain.

The middle layer, where intraocular melanoma forms, is called the uvea or uveal tract, and has three main parts:

The iris is the colored area at the front of the eye (the "eye color"). It can be seen through the clear cornea. The pupil is in the center of the iris and it changes size to let more or less light into the eye. Intraocular melanoma of the iris is usually a small tumor that grows slowly and rarely spreads to other parts of the body. 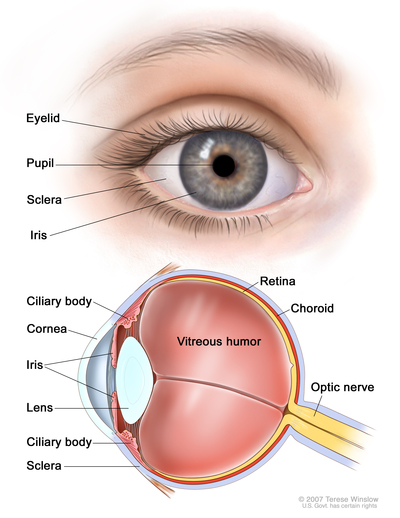 Intraocular melanoma is a rare cancer that forms from cells that make melanin in the iris, ciliary body, and choroid. It is the most common eye cancer in adults.

Being older and having fair skin may increase the risk of intraocular melanoma.

Risk factors for intraocular melanoma include the following:

Signs of intraocular melanoma include blurred vision or a dark spot on the iris.

Intraocular melanoma may not cause early signs or symptoms. It is sometimes found during a regular eye exam when the doctor dilates the pupil and looks into the eye. Signs and symptoms may be caused by intraocular melanoma or by other conditions. Check with your doctor if you have any of the following:

Tests that examine the eye are used to help diagnose intraocular melanoma.

A biopsy of the tumor is rarely needed to diagnose intraocular melanoma.

A biopsy is the removal of cells or tissues so they can be viewed under a microscope to check for signs of cancer. Rarely, a biopsy of the tumor is needed to diagnose intraocular melanoma. Tissue that is removed during a biopsy or surgery to remove the tumor may be tested to get more information about prognosis and which treatment options are best.

The following tests may be done on the sample of tissue:

A biopsy may result in retinal detachment (the retina separates from other tissues in the eye). This can be repaired by surgery.