Male breast cancer is a disease in which malignant (cancer) cells form in the tissues of the breast.

The following types of breast cancer are found in men:

Lobular carcinoma in situ (abnormal cells found in one of the lobes or sections of the breast), which sometimes occurs in women, has not been seen in men. 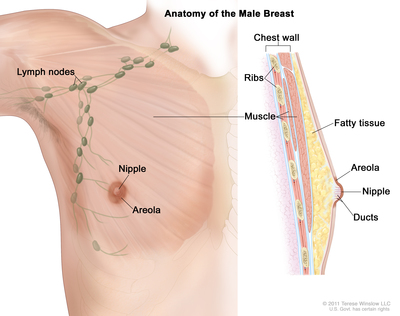 There are tests that can detect (find) mutated genes. These genetic tests are sometimes done for members of families with a high risk of cancer. See the following PDQ summaries for more information:

Men with breast cancer usually have lumps that can be felt.

Lumps and other signs may be caused by male breast cancer or by other conditions. Check with your doctor if you have any of the following:

Tests that examine the breasts are used to diagnose breast cancer in men.

If cancer is found, tests are done to study the cancer cells.

Decisions about the best treatment are based on the results of these tests. The tests give information about:

Tests include the following: