Neuroblastoma is a disease in which malignant (cancer) cells form in neuroblasts (immature nerve tissue) in the adrenal glands, neck, chest, or spinal cord. 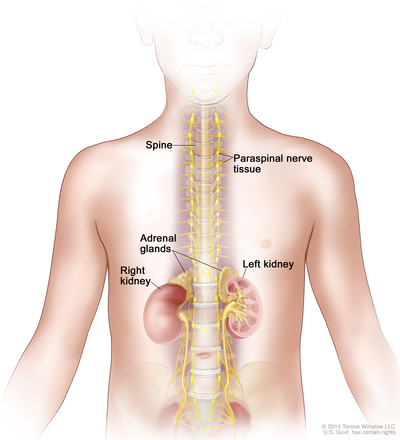 Neuroblastoma most often begins in infancy. It is usually diagnosed between the first month of life and age five years. It is found when the tumor begins to grow and cause signs or symptoms. Sometimes it forms before birth and is found during an ultrasound of the baby.

By the time cancer is diagnosed, it has usually metastasized (spread). Neuroblastoma spreads most often to the lymph nodes, bones, bone marrow, liver, and skin in infants and children. Adolescents may also have metastasis to the lungs and brain.

Neuroblastoma is sometimes caused by a gene mutation (change) passed from the parent to the child.

Gene mutations that increase the risk of neuroblastoma are sometimes inherited (passed from the parent to the child). In children with a gene mutation, neuroblastoma usually occurs at a younger age and more than one tumor may form in the adrenal glands or in the nerve tissue in the neck, chest, abdomen, or pelvis.

Children with certain gene mutations or hereditary (inherited) syndromes should be checked for signs of neuroblastoma until they are 10 years old. The following tests may be used:

Talk to your child's doctor about how often these tests need to be done.

Signs and symptoms of neuroblastoma include a lump in the abdomen, neck, or chest or bone pain.

Check with your child’s doctor if your child has any of the following:

Less common signs and symptoms of neuroblastoma include the following:

Tests that examine many different body tissues and fluids are used to diagnose neuroblastoma.

The following tests and procedures may be used to diagnose neuroblastoma:

A biopsy is done to diagnose neuroblastoma.

Cells and tissues are removed during a biopsy so they can be viewed under a microscope by a pathologist to check for signs of cancer. The way the biopsy is done depends on where the tumor is in the body. Sometimes the whole tumor is removed at the same time the biopsy is done.

The following tests may be done on the tissue that is removed:

Children up to 6 months old may not need a biopsy or surgery to remove the tumor because the tumor may disappear without treatment.

Prognosis and treatment options for neuroblastoma are also affected by tumor biology, which includes the following: