The gastrointestinal (GI) tract is part of the body’s digestive system. It helps to digest food and takes nutrients (vitamins, minerals, carbohydrates, fats, proteins, and water) from food so they can be used by the body. The GI tract is made up of the following organs:

Some gastrointestinal stromal tumors (GISTs) grow slowly over time and may never cause a problem for a patient, while others can grow and spread very quickly. They are most common in the stomach and small intestine but may be found anywhere in or near the GI tract. Some scientists believe that GISTs begin in cells called interstitial cells of Cajal (ICC), in the wall of the GI tract. 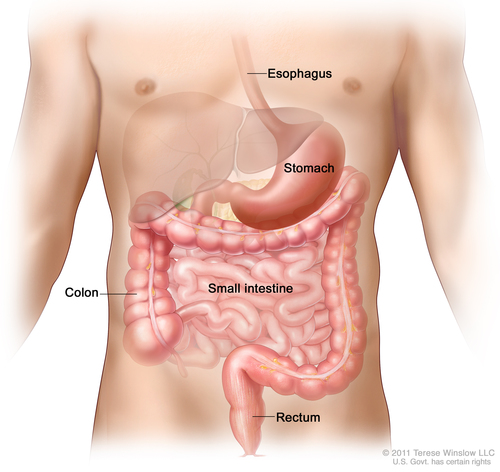 See the PDQ summary about Childhood Gastrointestinal Stromal Tumors Treatment for information on the treatment of GIST in children.

Genetic factors can increase the risk of having a gastrointestinal stromal tumor.

The genes in cells carry the hereditary information received from a person’s parents. The risk of GIST is increased in people who have inherited a mutation (change) in a certain gene. In rare cases, GISTs can be found in several members of the same family.

Signs of gastrointestinal stromal tumors include blood in the stool or vomit.

These and other signs and symptoms may be caused by a GIST or by other conditions. Check with your doctor if you have any of the following:

Tests that examine the GI tract are used to diagnose gastrointestinal stromal tumors.

If cancer is found, the following tests may be done to study the cancer cells:

Sometimes GISTs are smaller than the eraser on top of a pencil. Tumors may be found during a procedure that is done for another reason, such as an x-ray or surgery. Some of these small tumors will not grow and cause signs or symptoms or spread to the abdomen or other parts of the body. Doctors do not agree on whether these small tumors should be removed or whether they should be watched to see if they begin to grow.